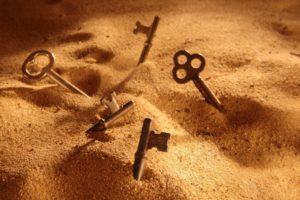 Imagine needing to leave your home for an urgent appointment. You haven’t tidied the house for a couple of days, so you’ve forgotten where you put your house keys. You go to the usual place: no joy. You go towards other places where you may have left the keys, such as the kitchen or utility room. Half an hour later, you find the keys, though miss your appointment.

In an academic study by three authors (Anna Nowakowska, Alasdair D.F. Clarke, and Amelia R. Hunt), the Proceedings of the Royal Society B revealed that there is no optimal approach to trying to find our keys. Using a desk, each participant was tested on their ability to find a set of keys. One half of the desk was cluttered. The other half was tidy. They were advised to focus on the cluttered half as new information could be processed.

The report concludes that we should look for the cluttered areas rather than the empty spaces. Therefore, if you’re looking for a set of house keys, perhaps you should leave them on a pile of magazines. The Sunday Times Colour Supplement could be a good place to leave them.

Well, strictly speaking, we recommend keeping your house keys in a safe place. One that is easy to trace before leaving the house.