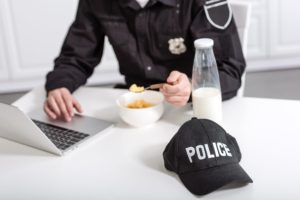 Throughout the 1970s, Unigate had a memorable advertising campaign based around mythical characters known as the Humphreys. They were invisible characters, apart from their red and white striped straws. The Humphreys liked their milk: too much for some, to a point where Unigate simply said “order another pint”. Almost fifty years on the spirit of the Humphreys is seemingly alive and well in West Yorkshire police stations. So much so that they’ve added a padlock to their pintas.

According to the Huddersfield Daily Examiner, they have taken to using a padlock to stop petty pilfering. One member of staff has taken to adding biohazard tape to their bottle of semi-skimmed milk. At Halifax Police Station, a nail under the handle, a plastic container, and a padlock is used to deter potential milk thieves.

At first, they thought it was a joke. From the Twitter account of PC Sharp, based at Huddersfield Police Station:

In other news, the milk theft in Halifax Police Station seems to be rife..when he said find one without a padlock, thought he was joking..! pic.twitter.com/dGZ4wKsvpq

On the other hand, with public sector wages falling further behind some in the private sector, would you be similarly protective about your pinta?

For the benefit of those who were born well after Unigate’s Humphreys campaign, here’s a couple of adverts. The first one features Muhammad Ali, whereas the second one features the Humphreys in formation (or rather, the red and white straws).