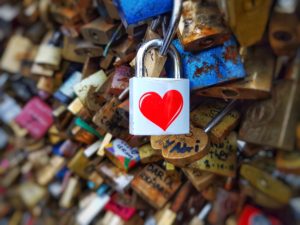 The first reference to love locks emerged in a Serbian tale of the First World War, with reference to Most Ljubavi, the Bridge of Love in Vrnjačka Banja. In the spa town, Nada (a schoolmistress) fell in love with Relja (a Serbian officer on the bridge). Shortly after their engagement, Relja ran off with a Corfu woman, whilst he went to war in Greece. Nada never recovered and died heartbroken.

Shortly, lovers who met on the Serbian bridge started putting love locks on the bridge. With love locks, the two lovers’ names are engraved on the lock. This was highlighted in I Want You, Federico Moccia’s 2006 book. The film adaptation came a year later. Shortly afterwards, countless love locks were seen in Rome and other cities got a piece of the action.

Gradually, the custom spread worldwide. As seen in the picture above, you cannot see the Arts Bridge in Paris for love locks. Every single bit of ironwork taken up by the padlocks. The Forth Bridge has them. Likewise, Brooklyn Bridge, and of course (till recently) Pont des Arts in Paris.

In 2015, there was a backlash with local authorities starting to remove them from bridges. The Guardian’s Arts Correspondent Jonathan Jones called them “the shallowest, stupidest, phoniest expression of love ever”. In Burton-upon-Trent, the Staffordshire brewing town’s Ferry Bridge has had them removed. This has been repeated on Victoria Pier, Kingston-upon-Hull.

Will love padlocks go the way of hula hoops or Pogs? What are your opinions on them? Feel free to comment but don’t expect us to unlock every single one of them in your locality, out of your peevishness.